The focus of the 2018 Mining Indaba, which was held at the CTICC in Cape Town, from 5 – 8 February, was investing in the capitalisation and development of mining interests in Africa.

Thousands of delegates, representing almost 2100 international companies, had the opportunity to interact and network with more than 400 sponsors and an estimated 45 African and Non-Africa government representatives.  Prominent investors in the African mining value chain, corporations, government ministers, international press and other industry stakeholders were provided with the opportunity to meet with the world’s major mineral producers, developers and explorers while business matchmaking was just one of the impressive programs offered at the 2018 Mining Indaba.

TMS, the internationally operating Belgian company, is a specialist supplier in the civil engineering sector, utilizing the latest computer technology to identify the parts that their customers require at the best prices available.

The TMS custom exhibition stand was created using the visually appealing logo and colours of the company.  As a matter of interest, this custom exhibition stand was not created with a standard shell scheme but incorporated a custom made outer shell that included multi-dimensional beams and the smart placing of various merchandise to maximise the minimal amount of space available.  The booth also paid specific attention to the finer details of décor such as the colour matching of custom made light shades to the four beams which transformed a quarter of the booth space to into a very accentuated networking area, complimenting the choice of furniture.

Furthermore, the custom exhibition stand that Extruct Exhibition constructed for Venezuela Mining was another moment for our professional team to display our willingness and expertise at showcasing our clients’ visions.

Venezuela, situated on the northern area of South America, is a major producer and exporter of mineral reserves (notably bauxite, coal, gold, iron ore and oil) which is considered to be unrivalled in South America and the sixth largest globally.  They are also a member of OPEC (the Organization of Petroleum Exporting Countries) which consists of 12 of the largest exporters of oil globally.

The custom exhibition stand that Extruct Exhibition created was as memorable and beautiful as the country itself.  It featured a custom built column that melded seamlessly with the rest of the custom built booth.  Paying attention to details is a key point of attentiveness that Extruct Exhibition is proud to demonstrate, as is evidenced by the artistic approach to creating this attractive column that complimented the choice of flooring material.  Not only was this column visible from a distance, in any direction, but our team was still able to custom build this exhibition stand to incorporate the client’s need for networking space and informative visual aids. 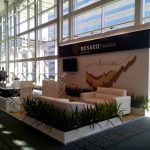